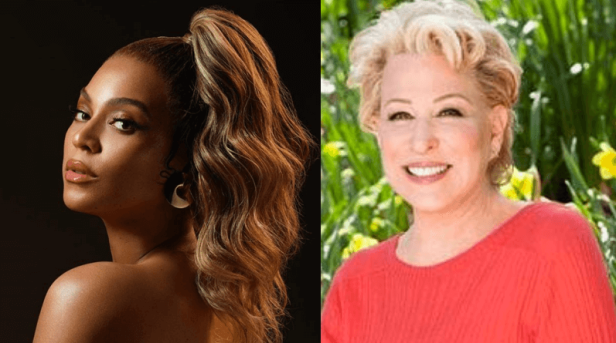 Bette Midler is facing backlash from people on Twitter after suggesting that; Beyoncé mobilize her 133 million Instagram followers to defeat President Donald Trump in the 2020 election.

#Beyoncé has 133 million Instagram followers. More than double the people who voted for Trump. Wouldn’t it be amazing if the #BeyHive mobilized to defeat him? I also wouldn’t mind if a regular bee hive fucked his shit up.

In a tweet that she posted on Thursday evening, the actress took aim at the superstar singer and her enormous platform by calling on the “#BeyHive,” as her fans are known, to help make a change in politics. However, just hours after Midler posted her thought to social media, others started to explain to her why it’s not the responsibility of Beyoncé or her fans.

Black Twitter went bananas on Bette for arbitrarily singling out Beyoncé instead of projecting her white-womanery on all the stars with significantly whiter female fanbases.

Jemele Hill, a staff writer for The Atlantic, responded to Midler’s tweet.

Being that 98 percent of black women voted against Donald Trump, you should probably hit up Katy Perry or Taylor Swift. Stop depending on Black Women to save everybody. https://t.co/P9AW8gXza7

You should probably talk to the 53% of white women who voted for Trump instead of expecting black women to carry this water.

Both Jemele Hill and Roxane Gay helped to reinforce that it was a majority of white women who voted Trump into office in 2016, rather than the black women who presumably make up Beyoncé’s audience.

Beyoncé has not publicly acknowledged Midler’s comment. Still, some people even suggested that it shouldn’t be up to any celebrity to get a certain politician elected.