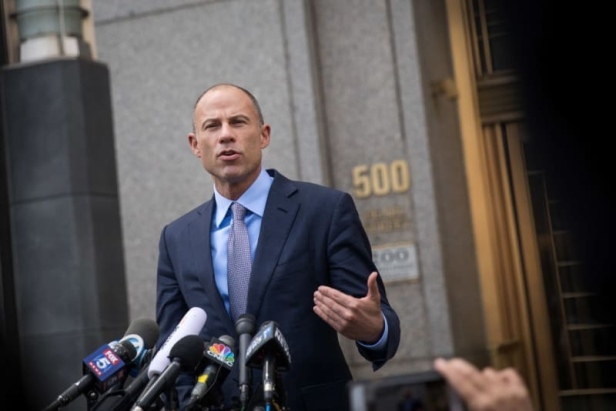 The high-profile attorney, who made a name for himself representing adult film star Stormy Daniels, faces charges in two states.

Attorney Michael Avenatti was arrested Monday on extortion and fraud charges in New York and California.

Prosecutors in New York allege Avenatti, who represented Stormy Daniels, the adult film star who said she had a sexual relationship with President Trump, conspired to extort $20 million from Nike by threatening to use his fame to inflict harm on the company’s image.

“I’ll go take ten billion dollars off your client’s market cap…I’m not fucking around,” Avenatti told Nike attorneys during a conversation on March 20, according to a criminal complaint.

Geoffrey Berman, the US Attorney for the Southern District of New York, told reporters the threat was Avenatti’s “shot across the bow.”

“A suit and tie doesn’t mask the fact that at its core this was an old-fashioned shakedown,” he said.

Speaking outside the federal courthouse, Avenatti told reporters he was “highly confident” that that he will be fully exonerated when all the evidence “is laid bare.”

The complaint filed by the US attorney for the Southern District of New York said Avenatti had threatened to hold a news conference on the eve of Nike’s quarterly earnings call to announce allegations of misconduct by company employees unless he was paid millions of dollars.

In fact, Avenatti tweeted earlier Monday about the news conference, in which he promised to reveal criminal conduct that involved “some of the biggest names in college basketball.”

Tmrw at 11 am ET, we will be holding a press conference to disclose a major high school/college basketball scandal perpetrated by @Nike that we have uncovered. This criminal conduct reaches the highest levels of Nike and involves some of the biggest names in college basketball.

Nike told investigators Avenatti claimed to know of rules violations by an amateur basketball team sponsored by the company, and called authorities when he made his alleged threat.

The company added that it has been cooperating with an investigation into NCAA basketball for more than a year.

Prosecutors allege Avenatti and an unnamed co-conspirator demanded $15 million to $25 million, as well as $1.5 million for a client, in exchange for remaining silent.

In a separate case in California, Avenatti is accused of wire and bank fraud.

#MichaelAvenatti charged with engaging in a scheme to extort Nike pic.twitter.com/zxS6vSyavu

According to the criminal complaint, Avenatti lied about his income to obtain more than $4 million in loans from a Mississippi bank in 2014 by using fake tax returns showing he made more money than he actually did. Prosecutors also allege Avenatti never filed returns for the three years prior to 2014 and owed the IRS $850,000 in back taxes.

A representative for Avenatti did not immediately respond to a request for comment.

In a statement on Monday, Stormy Daniels expressed disappointment about the charges, but said she wasn’t “shocked.”

My statement regarding my former attorney Mr. Avenatti.. pic.twitter.com/9aKYCPNN6y