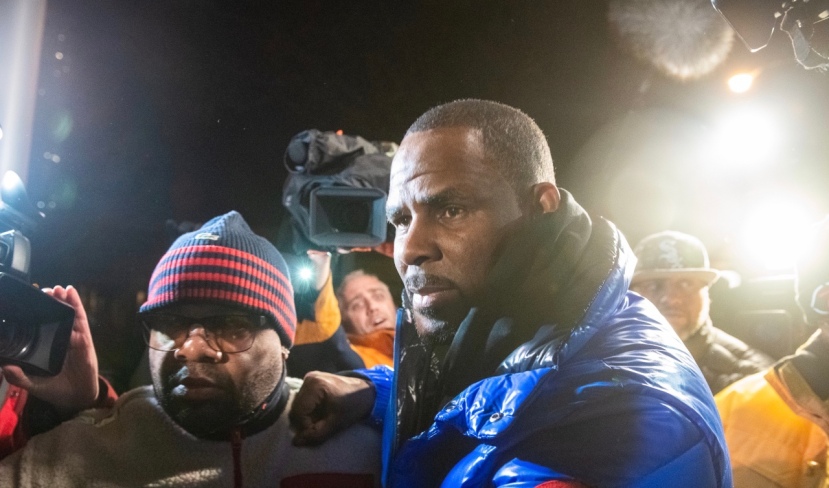 More than a decade after surviving a high-profile child pornography trial, R. Kelly on Friday was back in police custody this time accused of sexual misconduct with underage girls.

The R&B singer was charged with 10 counts of aggravated criminal sexual abuse. He is expected to appear in bond court Saturday one day after Cook County prosecutors alleged in an explosive indictment that the abuse involved four victims, at least three of them minors, from 1998 to 2010.

Surrounded by TV cameras, Kelly turned himself in to police about 8:15 p.m. at the Central District station on the Near South Side. Officers inside the station handcuffed Kelly and led him away.

After the singer’s surrender, defense attorney Steve Greenberg maintained his client’s innocence, claiming all of Kelly’s alleged victims are liars.

“I think all the women are lying, yes,” Greenberg said.

“Unfortunately the state’s attorney has now succumbed to public pressure,” Greenberg added. “Mr. Kelly is strong, he’s got a lot of support and he’s going to be vindicated on all these charges.”

Kelly had left his Near West Side studio about 7:45 p.m., surrounded by about a dozen members of his entourage and security guards, who left the building first and blocked out a path for the singer.

Dressed in a bright blue puffy coat and dark jeans, Kelly headed quickly to a waiting black Mercedes cargo van with tinted windows. He said nothing to the reporters who had waited outside the front door of the building at 219 N. Justine St. since shortly after the charges against him were announced.

“Is he inside? Do you have him inside?” one of the members of Kelly’s detail shouted as Kelly climbed inside the van. “Shut it. Let’s go.”

The van took off south on Justine, followed by several other vehicles and news crews.

Kelly has been dogged by allegations of sexual impropriety for two decades, charges that were first detailed by the Chicago Sun-Times. The indictment on Friday marks the first time he has been charged with any crimes since he was acquitted of child pornography charges in 2008 in a case that received international attention.

In the 36-page indictment, prosecutors outline a variety of alleged sexual misconduct. The victims are identified only by their initials.

In one instance, Kelly allegedly ejaculated on the victim’s body “for the purpose of Robert Kelly’s or L.C.’s sexual gratification or arousal,” the indictment says.

In the three other instances, the victims performed oral sex on Kelly, the document says.

Avenatti said he recently provided a videotape to the Cook County state’s attorney’s office. Avenatti claimed the tape showed Kelly having sex with a 14-year-old girl. At a news conference in Chicago Friday afternoon, Avenatti said he is representing at least one of the girls who were included in the indictment.

He declined to identify his client, noting she was a minor at the time of the alleged abuse. He also declined to say what his client told a grand jury investigating the singer.