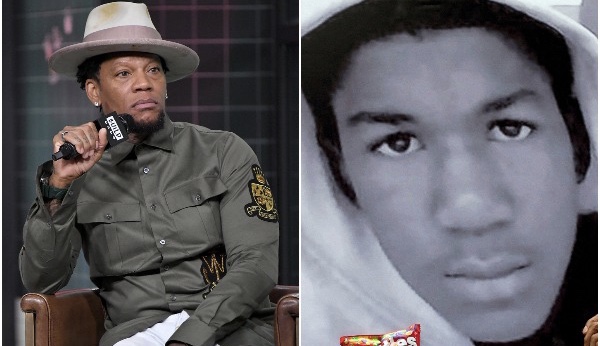 Days after what would have been Trayvon Martin’s 24th birthday, D.L. Hughley has shared a reminder about who was really the “thug” during the incident that led to the Florida teen’s death.

Then, a list of violent incidents and charges against him followed. They include domestic violence, aggravated assault, threatening to kill a motorist and pointing a gun at his girlfriend’s father.

“And Trayvon Martin was the THUG?” the meme concluded.

In 2012, Zimmerman, then a self-appointed neighborhood watchman, shot and killed Martin after following the unarmed the 17-year-old despite being told by a 911 dispatcher, “We don’t need you to do that.”

Outrage and protests followed, as well as a trial in 2013 that saw Zimmerman get acquitted of second-degree murder charges.

Since Martin’s killing, Zimmerman has racked up a host of other mugshots and headlines related to his violence. In 2015, he was arrested for aggravated assault when he threw a wine bottle at his girlfriend.

A year later, he was accused of breaking an iPad during a dispute with his estranged wife. Initially, she told a dispatcher her husband had a gun but withdrew her claim later. A lack of evidence led to no charges being filed.

However, Zimmerman’s history of domestic violence dates back to his 2013 arrest on charges of aggravated assault, battery and criminal mischief after Samantha Scheibe, his girlfriend at the time, said he pointed a gun at her face while they were arguing. Zimmerman also smashed her coffee table and pushed her out of their home. But since Scheibe didn’t cooperate with officers, a case wasn’t launched against him.