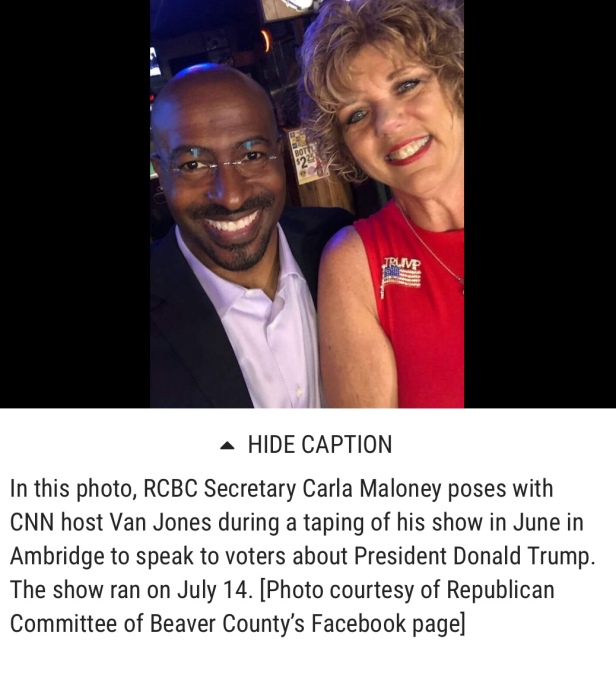 The Republican Committee of Beaver County’s secretary made racist Facebook posts last year about black NFL players kneeling during the national anthem, repeatedly referring to them as “baboons.”

Carla Maloney, a Hopewell Township resident, made the comments on her personal Facebook page, which can no longer be found, under the name Carla Belich Fueller. Screen grabs of the page show Maloney and her friends commenting on the anthem issue.

Chip Kohser, chairman of the RCBC, said the posts were made before Maloney was named secretary earlier this year. Kohser said he thought the posts were made after most of the Pittsburgh Steelers remained in the locker room for the anthem before their game Sept. 24, 2017, in Chicago.

“Tired of these over paid ignorant blacks telling me what I should believe in. I will tell you what I believe in and that is our Flag the National Anthem and America period end of story,” she wrote. “You don’t like it here go to Africa see how you like it there. We are all Americans not African American not Hispanic American. WE ARE ALL AMERICAN.”

Maloney then complained about “reverse racism” in America and said she was “sick of the name calling, rioting, shooting, and looting.” She predicted a civil war “soon than later.”

Further in the thread, Maloney turned her anger toward the Steelers and her racist language grew even harsher.

“Steelers are now just as bad as the rest of the over paid baboons. You respect your flag, country and our national anthem. How many men and women have lost limbs or died to protect this country and you baboons want respect,” she wrote. “If you want respect you need to earn it and so far you haven’t. Stop watching, or going to a game and paying for over priced food, water and tickets. Let’s see how the baboons get paid when white people stop paying their salaries.”

Maloney did not respond to an email inquiring about the posts and Kohser said he has told her to avoid making public comments. The committee’s executive committee will meet Saturday morning to discuss the controversy.

“Those comments do not reflect the opinions of the Republican Party as a whole,” said Kohser. The RCBC’s website page was down on Thursday, but Kohser said it was a renewal issue and unrelated to the controversy surrounding Maloney.